I was contemplating whether or not on going to Standing Rock Sioux Indian Reservation for over a week. I made a blog early August called- Neutral Perspective: Dakota Access pipeline project’s Pros & Cons goodnewseverybodycom.wordpress.com , which the number of "views" was the largest (130 at the time before I left on my road trip). After the unfortunate "Civil-rights" like abuse that friends on facebook was posting, I felt the "need" to want to see this historical event going "next door" myself in person. Also, I had many other reasons (e.g. dream of two "W's" in a cloud formation in a bright blue sky, which I feel like I saw the interpretation after my trip. I'll be sharing this in Part #3 of this continuous blog). I decided to just "step in faith" on Friday, December 2nd 2016. After watching and reading about this movement, I wanted to see myself with my own eyes after getting so much traffic on my blog ( Neutral Perspective: Dakota Access pipeline project’s Pros & Cons goodnewseverybodycom.wordpress.com).

Friday, December 2nd 2016: I left a little after 9ish in the morning after packing my car with all my "necessities". The driving conditions between the eastern SD-MN border and the town of was a little slick 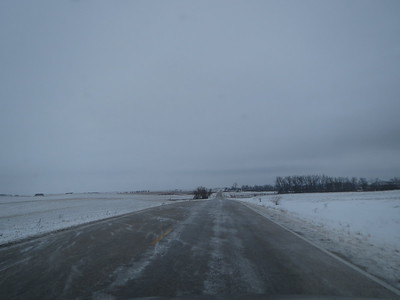 , which slowed my travel destination time. I didn't arrive in Mobridge, SD (southeastern border town of Standing Rock Sioux Tribe Reservation) till 2:15ish (an hour or so later than expected). Other factors was due to some breaks, such as getting meals at Walmart in Aberdeen, South Dakota.

When I got to Mobridge, I took my time driving through as I was curious about the town. I even drove off from main street to check out the neighborhoods.. 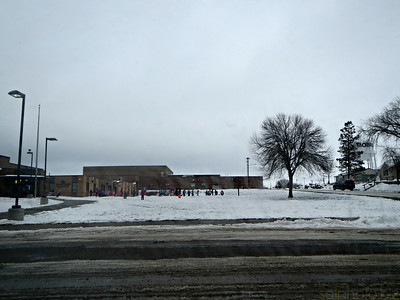 I then stopped at the Burger King parking lot to get out and take pictures of the Missouri River..


It was a beautiful view!

I didn't get to the actual reservation until I went on the Highway 12 overpass bridge across the Missouri River..

I did some reading prior to my trip and wanted to visit the Sitting Bull Memorial..

I couldn't stay long as I marveled the scenery as the winter days are short, so I went back on the road to travel north to Cannon Ball. Along the way, I gained an hour as I drove through the daylights saving time zone. When I went a little back east again from McLaughlin ..

While stopping here at a gas station, I ran into this elderly native. He tried to speak to me, but it wasn't in English. I thought it was cool to hear his "tribal" language. I just smiled and walked to the restroom. I notice the price of gas ($2.45) was the highest along this road trip. I would later find out that it might've been raised to prevent outsiders traveling to the "protest" site.

I continued the beautiful scenic drive up north on Highway 24 towards Fort Yates and accidentally took a detour drive around the town. I realized I was going the wrong way, so I went back to 24 and continued north to Cannon Ball.

Before reaching the campsite, I saw the church that I found online that I contacted prior to my trip...

I met one of the caretakers (Peter) and would chat about my trip. He shared how the pastor wasn't feeling well, so I ended up asking if I can pray together with him for the pastor. He accepted and we prayed. I brought extra food, so I decided to donate some to the church before heading to the camp to see if they need some more there too.

I finally arrived at the campsite around 4:20ish. The first camp was Sacred Camp.. 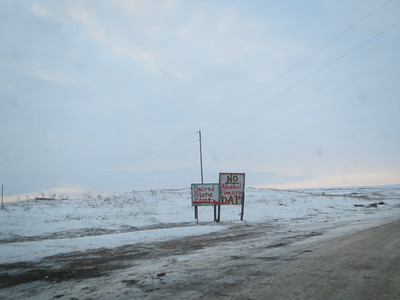 When I got there, I was met by a gatekeeper telling me rules of the camp, which I then drove in and found a spot. However, I didn't feel it was a great spot as there were no nearby bathrooms or community . I then drove out and decided to look for another camp, which I read about the others. However, the sun was getting close to setting, so I went back. As I was driving to the camp entrance, a new gatekeeper told me that the roads are going to get icy and might be slipper to get up the hill by tomorrow morning if I leave. I decided to look for another camp, so I drove further north on 24 towards Cannon Ball River..

I arrived at Sicangu Camp or Rosebud according to the locals I camped with there..

This was going to be my home for the weekend :)

As I drove through Rosebud, I was looking for a place to "camp". I found one just across a couple of porta potties along the river. I parked next to this car, but never had the chance to meet my neighbor as he drove off the following morning. This would become a regular pattern as people came and go. I took a pic from where I set up "camp" and marveled the beauty as the sun started to set..

.. I decided to walk around and bring a bag of snacks to hand out to people. I didn't walk too far and some young lady offered me one as she too was carrying a bag of snacks. I felt welcomed immediately as people would greet me and many would even say "welcome brother". I walked towards the entrance of the camp to the highway entrance and then veered along the pedestrian path on the bridge towards Oceti Sakowin Camp. As I entered the camp, I started chatting with a group of young Natives (teens or older?). I greeted them and they welcomed by saying "your Native" now! I then walked towards the big tent (a.k.a. largest sweat lodge) where they reportedly had a schedule of events (e.g. meetings for non violent protest).I then walked around and saw a group of people around this "stage" area...

There was someone on a mic most of the time making announcements or someone doing a performance. Across them, there was some people sitting around a fire and praying. Adjacent to the stage was a place to get hot drinks and some food ("kitchen"). I would hang out there and I wasn't sure what else to do. Awhile later, they announced they needed volunteer at the "carpentry shop" to help build tents for the incoming 2,000+/- expected U.S. Veterans. I heard about them coming this weekend, which I read in numerous social media reports and articles. I decided to go there and join to "do something"....

When I got there, a young man gave us instructions and we just started building these 4'x4' floor sections to be used. We had plenty of volunteers and we worked so fast that they told us to slow down and ended up stopping for awhile.

I decided to go and check out the "stage" for any updates in the evening. While watching-listening to the various speakers, I chatted with some young ladies besides me. They drove all the way from Ohio. They told me they are staying at a tent that their friend left for them as he left to go home after being at the camp for awhile. I would later learned that these camps had people come and go and people would take turns "fortifying" each other's camp. We would all walk back together to our camp as we were just a short distance from each other at Rosebud. I ate a late supper that evening (around 9ish) in my car and would try to go to bed. I had so much "stuff" in my back seat that I wasn't able to sit back comfortably. I ended up having a long night as I just didn't sleep well from 10ish to 8ish. I was hoping to get up at 6ish to attend a prayer along the Cannon Ball River on the other side (Oceti Sakowin Camp), but just didn't. I was awaken throughout the night and early morning. Around 6ish, a helicopter would hover both camp sites back and forth. I learned this from social media, so I turned off my smartphone to avoid of being tracked.

To be continued (as time permits for me to write)...Part 2!

Posted by goodnewseverybodycom at 7:03 PM