I spent my Labor Day (holiday) doing some house project as it showered a little in the afternoon. I put in the pipes and "bird seed" gravel over it in the right side (south eastern) of the month plus long trench project. I'm just glad I finish digging! I filled it in by hand using my neighbor's (Craig M, who is moving :( ) borrowed wheel barrel..a great workout! I continue to do this on Thursday (4th) as I did little by little like the month long digging project. I would do a little more of filling this 6-8 foot deep trench during the first weekend of the month between the workshops of this conference (Storm the Planet-see notes by joining Good News Ministry). This was such an inspiring motivational conference that I'm still "trying" to apply as I write this, which I'll be sharing more through this month's and future blogs.

Through the 2nd week, weeks after, and currently-God laid a "new song" in my heart, which was planted during the Storm of the Planet. I never ever thought I'll be doing this. Many years ago, there was a "prophetic" encouraging word that I'll be doing this, but my friend and I joked about this. Here is one song I wrote recently that took a month as I had to get a new piano to help me..

I don't spend too much time to "edit" the music as I usually just do one recording and then add my piano playing (still in the works too). Stay tuned for more as the "new songs" are to encourage people.

On Thursday, we had another anniversary of 9-11 , which I will always find "new" findings of what "really" happened in this unfortunate event.

The 2nd weekend, I went to Moose Lake for my once every other month visit. I took pics of the "early-stage" of Fall colors at Moose Lake State Park in Carlton County. The next day (Sunday), our local church had a share by missionaries from India. Then we went to our pastor's house for more shares of this country and the mission experience overall, which prayer was the theme message that was heavily encouraged.

I finally found the "sewer pipe" by the foundation where I dug the trench on the 18th. It was by the water line that was marked, so that helped! The following day, my workplace was another challenging day as we were short-stuff, but thankful to God to get me through one of many more! What helps me to get through long hard workdays like this is looking at the future, I was looking forward to my once a month visit to the Twin Cities. I was planning to attend some events, such as.. 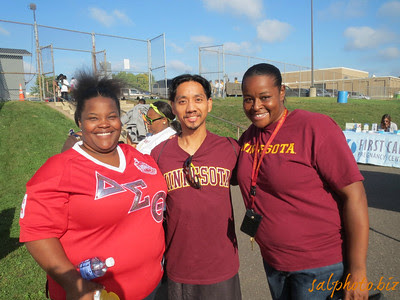 Also, the same weekend was my nephew's birthday, which we celebrated at my younger brother's house.

When I got back to Morris, I would attend a special guest speaker at a church my friend invited me to. He shared a message that was a theme (e.g. social identity, gifts, etc..) from the conference earlier this month.

I started a new house project on the 23rd (1st day of Fall), which I put special rubber pavers in my garage driveway. I just did a little as I want to test how it work with the coming winter season. The next day, I bought pies from the the annual Faith Lutheran Church Bazaar. I shared one of them with my students at my weekly ESL-GED classes. I noticed my students didn't like it as it was too sweet, which I've noticed from the past that many international students feel the same way. America's "unnatural" desserts are really too sweet with fake sugar! On Thursday, I went to my local church worship practice, which I always look forward too with a "new song" perspective after the latest conference. On the 26th, I treated a new UMM student (Jackie from Idaho) to the famous Don's Cafe. I met Jackie online through one of my facebook group's (Good News Morris, which she joined almost a year ago when she first applied at the local college and wanted to learn more about our college-community. We've been in dialogue since and it was great to meet her in person (face to face) the first time.

During the last "Fall" weekend of the month, it was the 2nd day in a row with 80 degree (Farenheit) weather, so I had to take advantage of it since I wasn't able to do everything that I wanted to do during the summer. I invited a friend (Chris) to a game of tennis, which I would later go with him to celebrate his early birthday with his family at Pizza Ranch.

After making a long list to the "new songs" that the Lord laid in my heart since the conference earlier this month, I tried to come up with the lyrics to the titles and recorded my first song...

It would be the first of more to come....

Posted by goodnewseverybodycom at 8:08 AM No comments: