I started the month doing more auto body work (putting primer paint) , which I would work on it for the first 2 days. On Wednesday (3rd), my workplace took some clients to Benson for our annual movie outing. I never heard of the movie, but it was great. I ended up “searching” it online and found out the movie didn't do as well in the “big screens”. I personally thought it was such a good movie, I even made a blog (Movie: Musical-What was Your Favorite Song or Scene in "Strange Magic"? creativemusicartsy.wordpress.com) to remember the songs (soundtrack list) and twittered it.

It was the first of four of the weekly “Morris Kiwanis Talent Show” on Thursday (4th). I went to watch the remaining of the 6 performances after my local church “worship team” practice. I'm not playing our men' summer softball team again this year for the 2nd year in a row due to “physical injury”. My right arm is “healing” after arm wrestling with a “friend” that made an illegal move (stood up and used both arms to “try” to put down my arm, which made a “tearing” noise :( ). However, I wrote down on (Friday 5th) that I was able to curl 25 lbs, which is the 1st time to doing any type of this arm exercise since prior to my injury.

On Saturday (6th), I made my every other month trip to St. Cloud to pick-up a “friend” to visit our “friend” in Moose Lake. Unfortunately, it had to be canceled, which I wouldn't know till the “last minute” when I got to my “friend's” house and he told me he thought he contacted me by phone that he wasn't feeling good (e.g. stroke recovery). I took advantage of my time in St. Cloud by visiting my favorite eatery (N.Y. Gyro). I then went to Menards to pick-up more landscaping material.

I continued my on-going driveway project (rubber pavers) on Monday (8th). I'm buying a bunch a little at a time as I was hoping the price will go down, which it has (almost $1-2 cheaper now). On Thursday (11th) after picking-up the Morris Talent Show signs , I went to Willies and didn't realize I lost my wallet until a guy (Kermit, who told me he has seen me around when he used to drive the Morris Transit) came to my front door to drop it off. I was very surprised and was very thankful (Praise God)!. May God bless him :). He told me he found it in the parking lot of the grocery store. This is the 2nd time that a guy in Morris found my wallet since I've lived here, which shows the blessings of living in a small town like this one :)

On the 12th, I went home (St. Paul) for my monthly weekend trip, which is the first of my “Friday-off” 3-day weekend. My parents took me to their favorite restaurant (Cambodian) and then I went biking around Battle Creek Park. The next day, on our (mom and I) way to downtown St. Paul, a car was driving in the wrong lane (our turn lane) and nearly had a “head-on” collision. Thank God, that drive swerve backed to his own lane...thank God! I did my regular outing with my mom to the Asian grocery store (Dragon Star) and while driving, I saw a U.S. Postal Service “mailman” and I drove to catch-up with him and handed him my postcard I was going to drive further away to a postal office. Talking about..God's timing, huh?! :) After going to the St. Paul Cathedral with parents, I went bike riding again in the evening before sun set. I then did my longest bike ride since this local-national competition the next day (Sunday 14th). First, I went around the path by the pet park at Battle Creek Park before church and then to Battle Creek Mountain Bike Trail - Mounds Park after wards. I was hoping to go all the way to downtown, but the path was detoured due to a bridge construction on Warner Road.

On Monday (15th), I released another parody on youtube called "Rip It" (“Push It” by Salt N' Pepa). I had Mohr plumbing come to my house (Tuesday 16th of June) to clean my sewer pipe and use a camera to see the condition of it too. I had a "good" report, which made me decide to finish my landscape project after hints for me to finish it now instead of next year. This was big savings for me too! I had a funny incident at work too when I was “trying” to help a client by bringing her “safety belt”. I asked her if I can help her put it on, but she replied -”I'm going to have a staff help me” as she walked away ;).

On my Friday (19th) off, I also took advantage of my day off by working on my kitchen siding and driveway paving project. The following day, I went with "family friend" to visit his son at Moose Lake. It was supposed to be our last visit in this every other month long drive, so we were happy this could be the last. As I write this, the certainty of his situation is not fully known yet..please keep praying! We then stopped at Molitor's Quarry to watch the Minnesota Twins game and had my favorite sweet potato fries..yumm!

I continued on Sunday (21st) adding to my bike challenge by going 5.4 miles around the local (Morris) bike trails. Then I finished my rubber siding project in my kitchen. The next day, I went to the driving range with a friend (Micah), which I would have probably my best golf driving in terms of hitting it far and close to the flag number of times (w/ the help of the wind) ;)..

I practiced more of my lines for the up-coming performance (Kiwanis Talent Show) throughout the week as a "last minute" decision to enter in the local competition. I wanted to sing another song (Alladin's "I Can Show You the World"), but my duet partner didn't know this song. She suggested this other song, which was Disney also. I told her I'll do it depending how well I can memorize it. I decided to go all out on Tuesday (23rd). Wished we did this during the "adult competitive" round last week, but the number of participants (#14) made it more fun and meaningful (wider and larger audience) on Thursday, June 25th 2015... 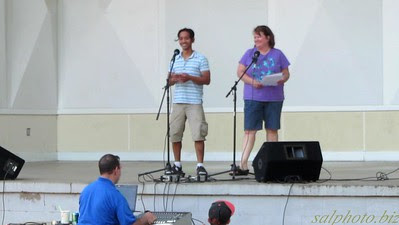 On Friday (26th), I met with my local pastor at his house as he wanted to show me the newest bathroom project. We were about to go biking to Starbuck, but was postponed due to this project. While I was there, I saw a song bird (Cardinal)! I would bike 6 miles on Friday (26th) despite the postponement of our bike ride to Starbuck. I did more of the rubber paver project (2 rows at a time after a sale of $2.99). The following day, I decided to finish connecting the drain pipes in front of my house after waiting since last fall. It felt good to finish filling the hole with dirt.

I would continue the landscaping project for the next week as I did little by little. I was able to put mulch that I stored from last fall on top finally on Tuesday (30th). Praise the Lord..thank you for giving me the strength to finish!

Posted by goodnewseverybodycom at 8:39 PM No comments: