I started this April Fools Day working my 2nd part-time job after my full-time job. I just worked several hours only. When I came home, I saw some friends doing some "April Fools Day" jokes on their facebook, so I decided to share a couple (e.g. changed my relationship from "single" to "relationship" & "Found new job teaching English in China"). I "fooled" a lot of my "friends", which a cousin of mine suggested I actually do one of them (teach in China). This is something I should wait and see!

On Friday (5th), I hosted a former UMM Alumn (Ryan F.) over as he was recently accepted on the UMM Alumni Board. I treated him to the newest "Mexican" Restaurant located in the 2nd floor (formerly Jose Burritos) of City Centre Mall. It was great to "catch-up" on how a former UMM friend/resident (from residential Clay A. Gay Hall) is doing nowadays. The following day (6th) was a packed Saturday as I took my newest housemate (Adnan from Pakistan) to several community events (e.g. CNIA Pow Wow, WCA Cattleman Steak Dinner, and Jane Adam's sponsored "Spoken Word Rodrigo" at Common Cup.< 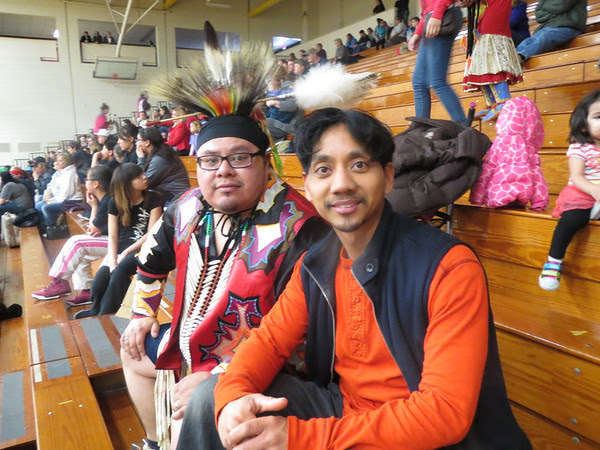 After a busy fun-filled Saturday, I went to the local gym for their "Fitness Frenzy" (Zumba and Abs exercises). The next day, it was "Holocaust Rememberance Day", so I decided to share one of my video project...

It was "Multicultural Heritage Week" at the local campus, so I took Adnan to check out as many of the cultural events (e.g. Blacktino the movie-> see Facebook Blog, Diversitunes, etc..)

On Thursday (11th), we had a another "Snow Day", which I took advantage of the day to take care of some "house stuff" (replaced my "old" water softener with one made from Valnes $1K). The next day after work, I was still in the mood to "Spring Clean", so I cleaned my "old" bedroom on the on the main floor to rearrange the bed of my newest housemate (Adnan). It was much needed cleaning, which I haven't done a thorough clean like this since I moved in 2006! During the 2nd weekend, I worked on my taxes, which I procrastinated before the 15th deadline.

On Thursday (18th), we had another snow storm, which we got off work 1 hour earlier. This gave me time to do some more "errands" before my housemate hosted a birthday party for his friend. Due to the "bad" weather that continued the next day, the local school closed. However, my workplace remained opened and I would ended up driving home (St. Paul) for the weekend as I would follow a little of the Boston Bombing "Drama", which the "last suspect" was found.

I spent the weekend visiting family and didn't do much (e.g. shopping with my mom & sis at Kohl's in Woodbury, watch my niece & nephew swim at the "old" Arlington High School, and watch Twins baseball on t.v. with my sis and her boyfriend).

On Tuesday (23rd), I went to support co-workers/friends at the "Annual Women of Today Talent Show" at the American Legion in town. The next day (24th), I took the "Defensive Driving Class", which my part-time job requires all of their employees to take. It was a great "reminder class" to learn to "slow down" in life.

It started to feel like "more" Spring on Thursday (25th) as I came home from work and put up the bird feeder out in my yard for the first time. I then put the solar lights along the sidewalk.

I went to a spaghetti feed fundraiser for the local fitness center at the elementary school on Friday (26th) with Adnan and some friends. They had a little dance going on at the gym of the school, which was fun! On Saturday (27th), I played outdoor "street-basketball" with a couple friends at the nearby court across the street from my house since it was a beautiful day. The following day (28th-Sunday), I took my housemate to my local church potluck after service. Then we went to a bowling fundraiser for the local Morris Life Care Pregnancy Center. We ended the eventful day with a "scream" (rock) concert at campus, which various bands ( Lessons + Word Will Spread + Zealot + Tracings) performed.

Posted by goodnewseverybodycom at 6:33 AM No comments: