I started the month with continuing my Metal Roof Project. We (Ed & Adnan) did the north side of the roof, which we got 2/3 of the shingles off. Fortunately, we get Fridays off, so the next day (2nd) I finished taking 1/3 of the shingles by myself early in the morning. I then clean-up the yard of shingles by throwing it in the rented dumpster. I took a break during noon lunch by going to the 1st "Community Meal" of the 2013-2014 academic UMM season. I then worked on the garage, which I was able to take all the shingles within 2 hours by myself. I then started putting black tarp, which I wished I bought more as I was able to patch some holes of the previous old tarp. Ed then came over around 4ish to help put the circular sky window in the north side of the roof. He would help me finish tarping the garage roof before calling it a day. I decided to clean as much of the scattered "old" shingles on the ground until sun set as I wanted to prepare for tomorrow. It was a long day, which I slept good (overnight) at my other job.
The following day (Saturday-3rd), I started early preparing the garage roof for the metal sheets. Ed would help me later in the morning, which I had a slight accident (fell from the unstable ladder, which I took the risk before climbing it. I landed hard on the concrete sidewalk with my right elbow. I found out later after an expensive $250 X-ray that it wasn't broken...thank God!). My housemate (Adnan) would help me do the east side of the roof. We did pretty good overall (wo/ Ed's help) despite a slant angle as we did our best placing the the first sheet, but didn't know how to use my balancer tool right. We did this within 1 hour and a half as we wanted to check out the annual "Flekkefest" parade 30 minutes north-Elbow Lake. We were running late, so I drove towards the end of the parade route to catch as much of it 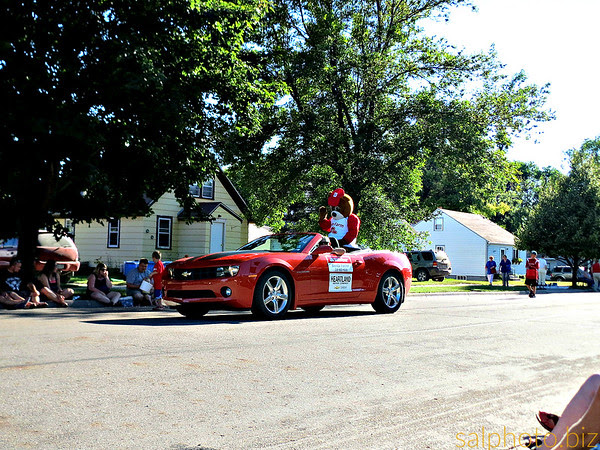 On Tuesday, August 6th-We had another hail storm. Some parts of town had softball size. Ironically, I was doing my metal roof (1/2 of north side already done), which it was replacing the damaged roof shingles from last summer's storm. Well, this hail storm did some damage on my new metal roof. I decided to cancel my claim to my home insurance because it wasn't worth it. We would finish (I was trying to get it done after 2 rain storms and didn't want to tarp it again before another forecast rain the next day, which never happened) doing the last half the following day (7th) , which we had some challenges (Ed had a hard time seeing the screws, so I had my lamp light on-hand. He almost slid down the slippery newly "oiled" panel, but Adnan caught him as he was going down-thank God!) as it got dark (9:45pm). Once we got the last panel, we celebrated with pizza (Casey's). Hallelluah!

On the 8th (Thursday), I took Adnan to the Steven's County Fair, which was his 1st time. On our way there, I popped my bike by accidentally putting too much air from the gas station. Earlier, I thought of just using my regular pump, which I should've followed my gut earlier! We live and learn! On Friday, we (Ed and Adnan) did some last finishing touches (put sides, which we ran out-short ordered. I would wait for another month or so to continue this as the parts took awhile to be delivered-due to custom order) of the metal roof for the "major paneling" part.
On the 10th (Saturday), I went to the cities and attended a couple of cultural ethnic events-Indian Fest & Irish Fest-both in St. Paul. It was great time hanging out with family. It was my dad's birthday on the 13th, so we did an early family celebration while I was in the cities.
On the 14th, Ed and Aisanne invited Adnan and I over for a BBQ with other friends (Elena & Plamen), We would do some Bollywood dancing! The next day (sorry-it was moved to the following Thursday, so the 22nd), I attended another BBQ, which my softball team hosted. Despite an "ok" season, it was a great way to end the season with a picnic. I had the 16th off, so I spend most of this day and part of the following morning to help Ed with his work as my gratitude for helping me with my metal roof project. Ed's been teaching me a lot about carpentry, gaining handi-work skills!
It was that time of the year-State Fair! I would go hangout with family on the 24th, which we decided this date because it would be the "less hottest" of the rest of the fair while I was in the cities. We went 9ish in the morning and stayed till 1ish in the afternoon. I'm glad we went because the rest of the fair the entire last week of August had temps around the 90's, which had low attendance. Good timing!
Even though I had 1+ week vacation from my full-time job, I had to go back to Morris on the 27th because of work (pt-job) the next evening and I was going to bring my newest housemate (Yuu-referred by my current housemate-Kazu-also from Japan) from MSP-International Airport to Morris. I would "last minute" bring another UMM International Student (Hannah-from S. Korea). I spent my less than a week of vacation (from my ft-job) doing some errands and community stuff (e.g. annual "Feed my Starving Children" & "Welcome UMM Community Picnic" on Thursday 29th).


Posted by goodnewseverybodycom at 6:21 PM No comments:

I started the new month by playing softball, which I went 3 for 4 (1st game-lost 13-14) and 0 for 2 (2nd game won 11-8). During July 4th (Thursday), I started getting all these e-mails, texts, and phone calls about one of my email accounts got hacked :(... I had to quickly change my password by contacting the email account provider while I had friends over for a afternoon BBQ. The following day, I would help a former housemate (Anthony) clean-up his parent's house from last months disasterous storm. It was a great workout and quality time with him and his family. I went to the cities that 1st weekend, which was shorter than previous July 4th week/weekends due to our shorter holiday week due to our snow day make up at my full-time job. When I got back to Morris, I would drive to St. Cloud due to a detour along the interstate. I decided to stop over at the Somolian grocery store there to pick-up some halal foods for my current housemate. I love eating these type of "natural" prepared foods! On Tuesday (9th), I would join some friends from my local church for a summer fun outreach activity based on this book called "Treasure Hunt" (see MCC August Newsletter). On the 11th, we had a heat wave (close to 94 F?), which I was glad that our softball game was in the evening. On our Friday(s) off (12th), I took advantage of it by doing some indoor (clean the base of the washer and dryer in basement) and outdoor (brick sidewalk landscaping adjacent to the garage) work. It was Prairie Pioneer Days weekend, so I went to the Finals of the Talent Show that same evening. However, it would be the only time I would go to the park as it was a busy weekend (rainy on Sunday, so the parade was cancelled for the 1st time I've been going to this annual summer "town" celebration). However, I couldn't refuse the pancake feed, which I enjoyed with some folks after church. The bloodmobile was in town the 17th, which I can't remember them being here during the summer in the past. I went to a Stevens Forward meeting on the 18th, but there was only one other guy. We chatted a little and then left early. On Friday (19th), I would play badminton with my housemate (cousin Manan visiting joined us too) in our new badminton set. We were killing time before our friends (ESL student-Olim and his cousin, both are from Uzbekistan) came over for a Ramandan celebration. The following day, we (Adnan, Manan, Kazu, and I) packed and got ready for our a big road trip to South Dakota... 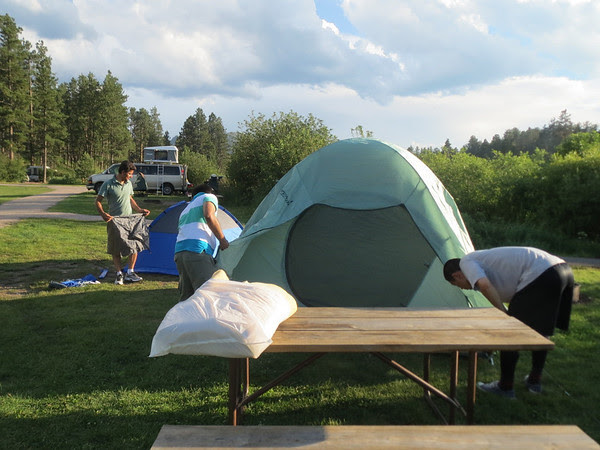 It would actually rain that evening in our first night, but fortunately it wasn't as big as it was reportedly the previous night (tourist we met at the Badlands told us it hailed!) 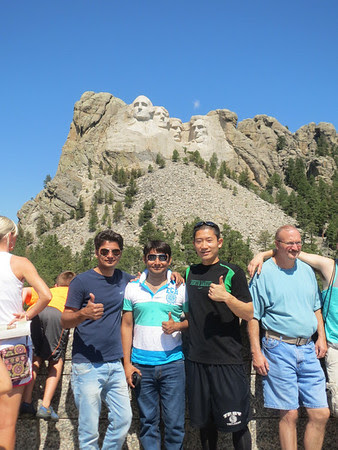 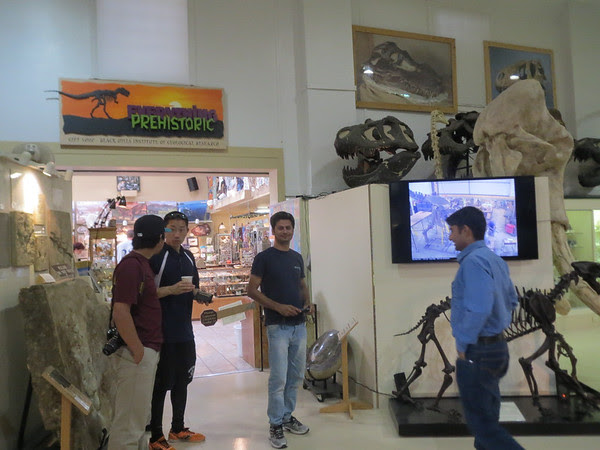 Overall, it was a great trip. I thank God for safe, fun, and blessed 3-day trip vacation! We arrived close to midnight as we turned in the vehicle (rental). I'm thankful for Heartland Chevy Motors for providing great service. My housemates and Manan had a supper to reflect on our trip on the 25th, which he would go home (Madison, Wisconsin) the following day. Talking about God's timing, a former college friend (Ryan F.) happened to be visiting Morris to go fishing with a friend from his church. They did a HUGE favor by driving Manan back with them to Minneapolis, where he would catch a bus (Mega Bus) back to Wisconsin-great discount fare ride leaving Minneapolis (35 something) compared to Alexandria (I think 70-100 something??). Praise the Lord!

The last weekend of the month, I took Adnan to Waterama for his 1st time of this annual celebration in Glenwood.. 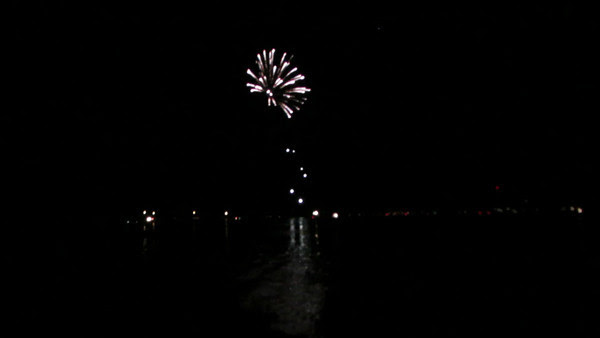 Vacation and fun is over, as I started my metal roof project on Sunday (28th), which I wouldn't complete the final project until mid-September due to missing parts that the order took awhile. Thank God that there were no serious injuries (Me-sprained my elbow after falling from an unstable ladder while working on the garage roof and hitting my roof-partner in the head with a 2x4" (3-6 inches long) in the head while throwing down foot stable platforms :( ). THANK YOU: Ed and Adnan for working together to help finish this meaningful project!

Posted by goodnewseverybodycom at 9:21 PM No comments: