I started the month while in the Twin Cities during my monthly visit. I went with fam to the annual "Grand Old Days", which was a showery-cloudy day. It was still fun to hangout with family as we went to this organic restaurant.... 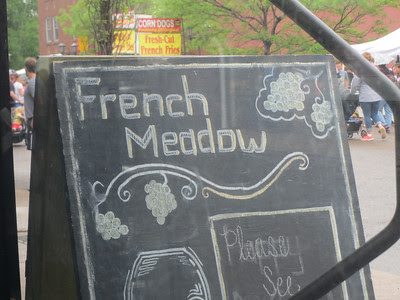 I ordered this "healthier" blueberry "organic pancake, which tasted somewhat dry. However, it was my first organic pancake and I know it's very healthy, so that made me enjoy it more. We missed my niece (Alyssa)being in the parade as we were still at my younger bro's house (watching cartons with my nephew Stefan), so she was a "little" mad :(. I went "hurriedly" went back to Morris after our get-together as I wanted to get home to see how my basement is after some torrential rains (3" reported fell over night) and more was coming. I came home and everything appeared ok, so I went to cover the front part of my house with some tar maps to divert the water coming from the metal roof away along the slight decline ground as far away from the house as possible. Also, I came early in case a college friend (Ryan F.) was coming early to visit, which I would later find out he was coming the next day.

Ryan and I would hangout at Pomme De Terre river by the dam to fish. I went to visit him and his friend along the shore after work as they've been fishing most of the day. It was good to see him as he's become a regular visitor here since he's been coming a lot with his involvement with the UMM Alumni Board.

On Thursday (5th), the first of four Talent Shows started at East Side Park, which has been a great annual summer community get-together. They had 11 acts, which is the most I've seen in years for the 1st week-mostly kids from St. Mary's School. On Saturday (7th), Chris tagged along with me to Alexandria to get some stuff for my on-going house projects at Menards. On our way to Alex, he took me to this Indian mound before going to downtown Glenwood (north of) highway 28, which I never knew existed until now. I'm very fond of Indian mounds as part of Native American history.

On Monday (9th), Ron N. came over to finish installing my windows (attic, kitchen, and master bedroom). It's his second time doing this as I'm doing a number of replacements as money comes. I can't wait to finally get all my windows redone. I'm also doing my on-going garage cleaning, which I was able to get some more "junk" (old windows, wood, etc..) as a "friend" replied to my tag on facebook that I'm trying to get rid of some building materials to make more room in my garage.

We (workplace) went to Benson for our annual movie-picnic for both Swift & Stevens County D.A.C. on Wednesday (11th). We saw this animation (Wizzard of Oz in animation) movie, which I wasn't able to watch all of it because of the "busyness" of my duty with work. My friends didn't like it, so I didn't really miss much. After the movie, we had a picnic at the Swift County D.A.C, which I played kickball (kicked a home run)for the 1st time in many years!

On the 2nd weekend of the month, I went to St. Paul for my regular visit (1st of 2 within this month). I helped trim branches for my dad, which he climbed a high ladder boldly despite me telling him I can do it! This apple tree has really grown since my mom planted (just threw it in the garden) this many years ago! It was Father's Day weekend, so it was a good visit "home". I was scheduled for my local church worship team, so I had to leave early Sunday morning (6ish) to get back in time before service (10am) for practice. After service, I would go with a friend (Chris) to the local golf course to the driving range. I couldn't believe how much water/rain Morris got after being gone this past weekend... 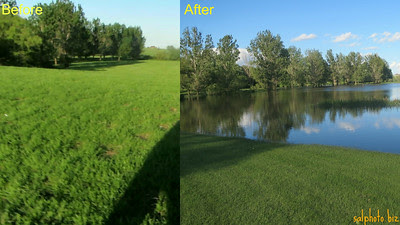 Some other places (e.g. roof damage at the Morris Public Library & St. Mary's School) in town would get water damage. I too had water damage last year from a rain storm, which was due to having no cover in my roof while putting on my metal roof. I took the shingles out already and I tried to cover the roof as much as I can, but water found it's way in. I finally was able to repaint some patches in my kitchen that paint came off due to the rain water leak on Monday-Tuesday (16th-17th). This was one of my summer to do projects and was able to get it done before "summer" officially started.

On Sunday (22nd), we (Morris Community Church) had the worship team from Nueva Vida Morris that I've visited/attend since they started years ago, come play music in our service. The pastor (Hector) later shared a message about "God's timing" for everything in our lives no matter what circumstances that is challenging we face. It was a great service overall as I brought a friend (Evan) from my workplace and he was on "fire"!

My last day of the month was my bi-annual dentist appointment, which I learned some tips to "better" take care of my teeth. Got any personal tips yourself?

Posted by goodnewseverybodycom at 6:00 AM No comments: