I started the month hanging out with friends during a movie night. I then went to Body Pump the following Saturday to start my 1st weekend of the month. We had a guest (housemate's college friend that transferred to another school) over during the week visiting. I then went to the Spanish-speaking church on Sunday, which they had a potluck-great Mexican food!

On Monday (4th), I shoveled more (1-3 inches) and then worked more of on the basement (re-screwed the kitchen cabinets with the help of a friend-Clint the next day). The weather was bad enough on Tuesday (5th) that the schools were closed. On the 6th (Wednesday), one of our volunteers made some brownie chocolate cake for our weekly ESL/GED classes.

I went to the cities the 2nd weekend of the month for my monthly visit. We did a movie (Atonement) night on Friday, then hung out at Maplewood Mall on Saturday after getting new prescription glasses, and celebrated my birthday (got gifts: sister-sweater, brother-camera light accessory, dad-buffet, and mom-sweater) early by going to a local buffet restaurant in St. Paul. I noted in my calender that I was "thankful" to God for the safe drive to and from (icy roads along State Highway 28) the cities this weekend trip!

On the 12th, I had a new housemate (Adnan) that moved here all the way from Pakistan. He was introduced to me by another friend working at the USDA Soil's Lab as researcher intern. His visit started a little "bleak" as his luggage was lost, but was later found and delivered 2 days later. I took him to zumba with me on Thursday (14th), which he appeared to enjoy. Prior to going to Zumba, I roof shoveled for a co-worker as she's been having a lot of icicles on her roof and I wanted it cleared as much before the next storm (following day). We did have a "Snow Day" the next day (Friday, 15th), which I took advantage of the free-time to clean (e.g. Adnan's bedroom, which was needed cleaning as I haven't done a thorough cleaning like this since I moved in back in 2006!). On Saturday, I invited Adnan to his first pancake feed (with another friend-Eric) fundraiser (for eye glasses to "3rd" world nations) and then Journey that evening.

On Sunday (St. Patrick's Day), Kris shared at my local church about how we need to be more "open and real", which I took it as Christians need to be less "fake" and be more "open" about sharing our daily struggles to let others know that we go through some "hard times" and we need lean on each others' shoulders. This was similar to a "word of encouragement" given by a brother in the Lord last month at the local church. On the 18th (my birthday), we had another "Snow Day". This made it a 4-day weekend! It was a blizzard that dropped 2-4 inches of snow. It was somewhat a birthday gift as I was able to stay home (worked several hours at the group home as I was called in since there wasn't much to do with many places closed in town), but couldn't celebrate since one of the restaurants I wanted to "party" at was closed :(. The next day (19th), my workplace started 2 hours later. My workplace celebrated my be-lated birthday on the 20th (Wednesday), which I'm very grateful for the people I work with. I then attended Zumba (Thursday 21st) with the "kid" I've been taking weekly with and his younger brother decided he wanted to join us this time.

The following day (Friday, 22nd), I had a chance finally to eat out at Water's Edge in Starbuck, Minnesota. I've heard so much about this place, but time never allowed me to check this place out. A "friend" (Neil) that I've been chatting off and on at the RFC actually invited me as he wanted to "learn more" about me.

On Saturday, March 23rd-I went to Andes Towers Hills to go snow-tubing with friends, which was the 1st time for 2 of them (Pakistani and Filipino)...

The following Sunday was "Palm Sunday", which I wasn't able to attend any church services as I was in the cities for a one-day visit for the annual "Philippine Day" at St. Paul's Landmark Center. I brought the same 2 friends that went with me to Andes the other day. It was great bonding time! My dad seem to enjoy talking with Andrew about his life in the Philippines. My dad openly shared about the "girls" he encountered during his younger days attending school (college) as Andrew shared about the various regions he's been to in the upper region of the Philippine islands. After our short 1 hour visit at my parent's home, we went with my sister and mom to this annual event...

....It was great to eat some Filipino food, which I've missed it since my trip to the Philippines last Fall! I met some "child-hood" friends (Sara & Bernard via my Aunt Toni) at the event, which was great to catch-up.... 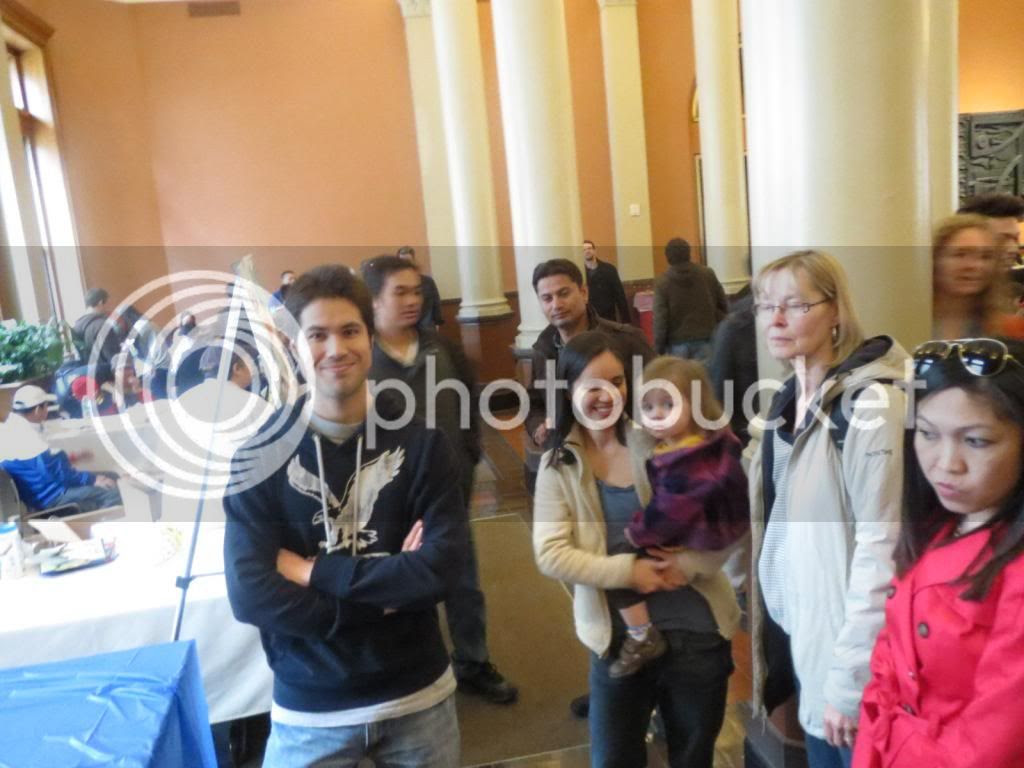 Also, I submitted a photo for the first time at this annual event, which I didn't expect to win. I just wanted to "try" and be part of this event as a active participant.

On Tuesday, March 26th-I took Adnan to Jane Adams for the 1st time. The theme at this weekly gathering was a participant (Fredrico) sharing about Mexican culture (e.g. bailando-dancing). He made it fun by having all of us "try" to dance, like a mini-dance class.

On "Good Friday" (29th), we had a 1/2 day off from work (supposed to be a full day off, but it was part of a "make-up" due to our on-going winter weather related "Snow Days"). I took advantage of the nice weather (50 F) by wearing shorts to the local gym and roof shoveling (prevent small leak at one of my renter's bedroom).

I had to work the overnights during Easter Holiday weekend, so I wasn't able to go home to the Twin Cities. I didn't mind since I've already visited family 2x this month alone. On Saturday, I went to visit a friend in Moose Lake prison with a mutual friend. It was a great trip to catch-up with this mutual friend, who is friends with the family of the inmate.

Posted by goodnewseverybodycom at 6:18 AM No comments: