The last month of 2015 started with a presentation (Sal's Presentation on the Philippines: Spanish Connection) I was invited to do at the Jane Addams Project, which I have been attending since it started 3-4+ years ago at the local university..

It was an interactive presentation I wanted to do to bridge the diverse attendees. The karaoke idea would ended up being part of the end of the semester's party too (Friday, December 4th). I bought this microphone at the local Radio Shack and just attached it to my electric guitar speakers, which made an easy "homemade" karaoke machine that I can use for the future.

Going back, I would attend the local college campus IVCF service as a friend came back to lead a "healing service", which was just a faith builder for all. He would lead a bunch of other college students to do a "Treasure Hunt" the following day, but I wouldn't be able to come since our local church had our once a month group worship practice.

On Saturday, December 5th-I went snowboarding (my friend Chris came along, but he skied) for the first time in 2 years. I wasn't able to go to Andes Tower Hills earlier this year because it was just too cold. When it warmed up in March, all the snow melted quickly :( I had to warm my self up, so I went on the bunny hill first. After awhile, I would end up going on all the hills that were open and ended-up in the biggest hill! :)

I would spend most of the 2nd week by working on the videos for the recent musical I videotaped for the local high school-> The Addams Family Musical .

During the 2nd weekend, some long-time friends that moved out of Morris came back to visit. We would hangout at the newest Mexican restaurant in town.. 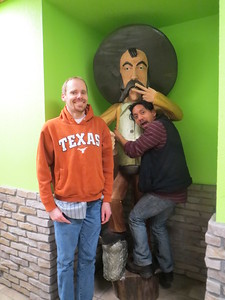 It was good to catch-up and to know my friend Eric is doing a lot better since his surgery. The following day (Sunday 13th), I played a video (Spoken Word: “Who Am I….”...

... I previously recorded with a short -testimony at church during the annual "Christmas Program".

The month of December has many great holiday parties and one of them is the annual "Tea Party" at my workplace. On Wednesday (16th), the weather was "horrible". In fact, many schools around the area cut out early, but we kept going. We thought the numbers were going to be really down, but we had a better turn out than expected with the weather. The next day, I would play some indoor soccer with a couple of friends (Michael & Chris), which was my cardio workout for the week! :)

On the 18th (Friday), some co-workers (Paul, Oray, and Olga) and I went to see the highly anticipated movie "Star Wars: . I was so pumped up after the movie that I ended up making a whistling video of the theme afterwards-> Music: “Star Wars” movie theme (whistling). The next day, I went to Andes Tower Hills again and took a friend/co-worker (Oray) and "tried" to teach him to snowboard..

It was a little colder than 2 weekends ago, so I actually wore my heavy winter jacket instead of my fall one.

The day before Christmas Eve, I was invited to videotape the Christmas program of St. Mary's School at the Assumption Church. Prior to videotaping, I went to a co-worker's party she hosted for us. Unfortunately, I parked on the side of the road and got stuck. This caused me to be late and ended up having some technical problems with my camcorder. Fortunately (thank God), I was able to correct it in-time, but missed several performers (kids playing piano) :( .

My work (pt-job) called me the day before Christmas Eve that I didn't have to work the over night, but I ended up staying in Morris (instead of going to St. Paul early) to work on the recent Christmas Program video and other "catching-up" projects (e.g. cleaning my house). It was actually a great start of my 1 1/2 week vacation. I would end up going "home" (St. Paul) to visit family during Christmas vacation-weekend. It was good to see family and help my aging parents out.

I ended up coming back to Morris to deal with some home appliance issues (water heater got old and was done) after my housemate/renter emailed me the problem. I came home to find a "leak" around the water heater, which was sign it was definitely finished and "NOT" fixable. Prior, I stopped at Menards to scout out the available water heaters, but didn't pick one yet as I didn't have the dimensions. I look back and wished I just took the chance and got one, IF a friend/Morris resident (I saw there) that happened to be there could've been able to load it back to Morris. Anyways, I ended up paying this plumber (Chris from Elbow Lake) to do the job after a couple of friends weren't able to.

I was thankful to God that I got it fixed and replaced as soon as possible (within 3-days). Couldn't find a perfect time for this to happen. I would have to work my pt-job (overnight) once this last week of the month before I went back to the cities to watch a theatrical performance at St. Paul's Ordway Center -> Sound of Music. I've been anticipating in seeing this since I first heard about it coming to St. Paul back in August/early September. It was all God's provision as I tried to buy these tickets for last week's performance, but couldn't find any "good seats". I even was about to purchase some "bad seats", but the computer wouldn't let me charge it to my credit card. I look back at this and feel it was definitely ad "Divine" work of God as it's rare that my credit card payment didn't go through when purchasing online. I happened to be playing on the computer to check out other performance days later and found a date (31st) of an "added show" that was "last minute" added...Praise the Lord! I ended up inviting my parents and nephew. My sister ended up tagging along with her fiance (James), but couldn't get closer seats because they bought it later even though I emailed my sister the "last minute show added" the day I purchased it, but she didn't want to take the chance with the weather. I ended up taking a risk as I saw this as an opportunity that might not be open again!

Posted by goodnewseverybodycom at 12:07 PM No comments: