I began the first week of the month with my annual week summer break from my main job (DAC). I went to my first Minnesota Twins game of the season, which we won in a high-scoring 10-8 "see-saw" game against the second last place team (Kanas City Royals)!..

I spent "quality-time" with my niece and nephew as we did variety of activities: nearby park/water park (during the July 4th when it reach over 100 F!), local library, etc..

I had to get back to Morris early as I had to work my part-time job (group home) on Saturday the 7th. It worked out timely as I was able to help and participate with my local church parade float at the Hancock "Indpendence Days" Parade..

I helped passed out these small bubble makers. It was fun walking with friends from church on a beautiful sunny weekend around the small-town!

During the second weekend of July, I participated in the annual summer "Prairie Pioneer Days" by getting some good food (pork sandwhich from a new booth) at East Side Park. My friends then wanted to go to Lake Minnewaska (Starbuck beach), which I sat and watch since I went swimming to "keep cool" (90 degree weather again) the previous day (at the Regional Fitness Center). I ended the weekend by going to another Minnesota Twins game (2nd within a month/week!), but unfortunately they loast (agains the Oakland A's) and it was a "challenging" time with my work as we fought the crowds "looking" for a couple of people at times (long story). I'm just really thankful to God that the trip ended well!

The following day was another "heat wave" (over 90 again), so I decided to contact some friends to check out the water park in Benson (20 minutes SE of Morris).

It was much cooler perspectively the next day, so my friend-housemate (Kazu) and I went to local golf driving-range. I was able to hit it between the 2nd to last flag (200+ yeards)-it was a good golf day!

The next day (18th), it finally rained (short downpour) after almost a summer month without any! Praise the Lord for another answered prayer, which was needed after a good corn crop (past knee high by July). We would have more precipitation (showers) on the 21st, 24th, 25th (t-storms), etc..

In national news this month, there was an unfortunate shooting..yes, another! This one happened at a movie theatre in Colorado. As of today (August 27th 2012), there has been many more afterwards: shooting at the Empire State building in N.Y.C., mall shooting in Texas, etc.. It's people w/guns that kill people, not guns!

In international news, the Summer Olympics started in London, England on Friday, July 27th with a beautiful opening "comical" ceremony.

I ended the month by taking a couple of friends to the largest parade in west-central Minnesota-Glenwood's Waterama.. 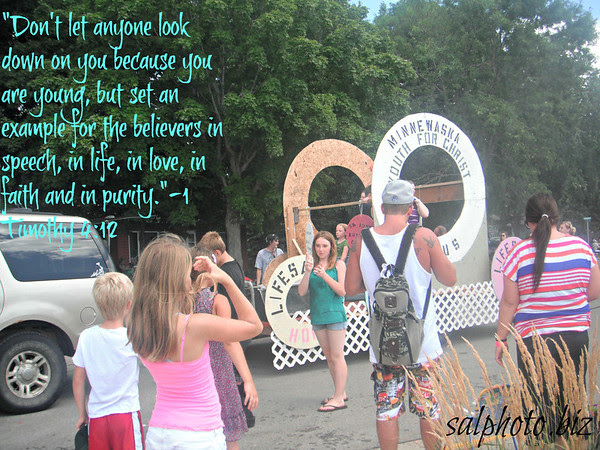 Posted by goodnewseverybodycom at 5:34 AM No comments: