I started the month by going to our regular Adult Basic Education training (ESL & GED) in Alexandria, Minnesota. After, my friend and I went to Menards to pick-up some ordered carpet for my basement. We would find out there was a tornado or severe t-storm that hit a town south of here (Melrose), which I was more thankful for missing this system going to and from Morris. We would arrived in Morris after they got hit severely too.

The following day, we had some more students (ESL & GED) that had their last day of classes. We celebrated (had ice cream cake) the last day of 2 from China. We were very fortunate to have these two as they were attending the local university for just this year and they wanted to learn more English by coming to our weekly class. It made me feel more special with their desire to come to our clases.

Then on Thursday, May 3rd-It was the annual "National Day of Prayer", which I watched a internet live stream from the University of Minnesota Twin Cities campus. It was encouraing to see young adults on fire for God

On Friday, May 4th-I launched "Sal Photo-Videography" group on my facebook account, which I felt would be a great way to "show off" my past, current, and future photo-video work. I decided to upload pics from last year's college graduation and one short video as my first album.

I'm thankful to God for a successful surgery (e.g. throat) that my mom had on the 4th, which she was able to leave home the next day after resting over night.

On Sundays, I've been attending 2 church services (1st-local church and 2nd-Spanish serivce). I was very much blessed in both services. The first one, I had a friend that shared about "prayer" and how we need to be challenged to "pray" more effectively by seeking His desire. In the second one, it was cool to have a friend that I haven't seen for 3 years come to the Spanish-speaking church service as she returned back to Morris recently.

My housemate (Kazu) graduates this week (Saturday, May 12th 2012), so we did a pre-BBQ party at Clayton A. Gay Hall. It was fun celebrating..

The graduation was outdoors, so I was looking forward to taking some better pics then last year.. 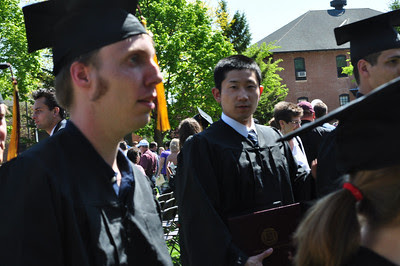 Following the graduation, my housemate/renter (Kazu) and decided to do a post-grad BBQ celebration in my backyard. It was great weather and thankful to God for another nice day for another BBQ!

It was Mother's day the following day, so I made sure I called my mom as my Dad took her out to Red Lobster to celebrate. At the Spanish church service, we celebrated Mother's Day by doing a BBQ outside-guys grilled!

The next day (14th), I finally had the chance to start my garden (see pictures). We had an early thaw, which many folks around here already got theirs started. It was good to get it going as I planted old corn seeds and many other plants that were given to me for free from co-workers. I would do more yardwork the following day, which was much cooler (70's compared to 90 the day before).

I went to Duluth the 3rd weekend with Kazu as I dropped a couple of friends visiting a family member in Moose Lake. We did a quick tour of the city as I was able to hang out for only and hour before going back to Moose Lake to pick up my friends.

The last weekend (Memorial Weekend) of the month, I went to the cities to help with moving (stuff from my mom's to dad's). It was an unfortunate move because of the mortgage, but "good" came out of it as it brought my parents (see on-going family re-building story) back to living together. more..

Posted by goodnewseverybodycom at 8:35 PM No comments: