I started the first weekend of the month by visiting family in St. Paul. I helped a family member move into her new place in the Twin Cities. The weather was great for moving. I spent some quality time with my sister while putting up her new dining room table. It was Daylights Savings time (Fall back), so we gained an hour of extra sleep! James' family treated all of us movers at Perkins in Roseville before I headed back home. Along my way home, I went to get windows in Menards in Alexandria. I took the "chance/risk" by putting one of the large windows on top of my car with the strong 20-30mph winds. Well, I was so focused on not wanting my window to come off from the "well secured" (bungee ropes) roof that I lost focus on the up-coming stop sign just 1/4 mile north of Menards on the back roads that I went through the stop sign!...nearly hitting an up-coming vehicle going east on the stop sign. I just swirved in front of the car and turned right going east too. THANK GOD I didn't hit the vehicle avoiding a near serious car accident!..weh!

On the 4th (Monday), I did more raking (after arriving from my Benson route) in my yard before heading out to the weekly ESL classes at the local campus to join some friends there.

On Friday (8th), my housemates and I hosted a sushi party again. It cool to invite friends of ours from the college. The following day, I took some friends to Don's Café after the recent award for "best grilled cheese sandwich", which I had to try my self.. 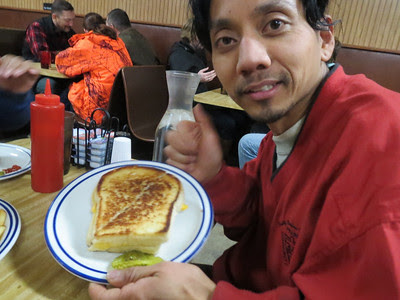 After close to 2 weeks, I finally found (a client from my workplace was being sleazy-joking around and took it off from my jacket pocket when I wasn't aware...lol) my nearly broken cell phone. Fortunately, I was in the process of ordering a replacement (smart phone instead) prior to "losing" it, but I wanted to take out the smart card from the "old" phone and put it in my "new" smart phone. It was International week at the campus, so I would attend several events: Fashion Show, International Country Spotlight, and a movie-"American in China.

On Thursday, November 14th-I brought my housemate (Yuu) to his 1st parade in Morris->


The weather was fairly warm-compared to previous parades!

On Saturday (16th), I went to Alexandria for my quarterly teacher's training. I picked-up some items for our "Japanese-theme" food party my housemates and I hosted to some friends (Marta, Bailey, etc..). The next day, there was a church potluck at my local church. The guest speaker (Jim M.) shared about the story of Baal (false god) in the Bible and how people can "call-upon" the "real" God through His answered prayers. During the service, pastor Pat led prayers for a young couple in our church that lost a newborn :( and also the tsunami in the Philippines. I would make a couple of tribute videos for this historical natural disaster-> Philippine Typhoon Haiyan-Yolanda 2013 Awareness Video & Philippine Typhoon Haiyan-Yolanda Relief Thank You-Salamat to show my prayers and support living this far in this part of the world.

I wrote down "snow" on the 21st (Thursday), so this was probably our 1st "significant" snow fall. I remember going to the local library to do some errands and then I rode my bike to Subway to meet a friend (Eric) that I haven't had the time to "sit down and talk" for a long time. It was good catching up!

On Saturday (23rd), I went to a "friend's" jazz concert to support her as she's been a faithful volunteer in the weekly ESL classes on Wednesday nights at the local school. I then went back to my house to join another weekend party my housemates were hostingn(w/sushi).

On Sunday (24th), I had to attend a "make-up" inservice meeting with my 2nd job about "Fire Safety". I was somewhat "angered" about having to attend on a Sunday and miss church service. However, I was going to missed it if I was able to have friends join me to drive to St. Paul for a "Haiyan Typhoon Fundraiser" sponsored by the local Filipino community in the Twin Cities. Unfortunately, my friends were too busy with school work, so I decided to go to this inservice meeting that lasted only 15 minutes or so in Wheaton (40 minute drive NW of here). On our way back, my co-worker and I continued our "small-talk". I then had that "Holy Spirit" touch, which I felt this trip can't be wasted. There needs to be something more "worthwhile" of this trip. I felt the need to share the "Good News" with this co-worker of mine since I couldn't go to church. I ended up sharing my personal testimony with him after he shared about some of his own "personal battles" (which we all have). The lesson from this is "God is in control of all your circumstances" no matter if it's not going "your" way; as long you let Him have "His" way!

On Tuesday, November 26th-I attended the weekly Jane Adams community gathering, which they had a Japanese theme. I invited my housemates, which Yuu was able to go. We learned how to do oragami, which I've done already in the past. On Hanukkah (Wednesday 27th), I attended my weekly Bible Study gathering, but the host wasn't available. Thus, we met at Neil & Ruth's house for breakfast. The following day, I would go to the cities with my housemate (Yuu) for Thanksgiving after I got off my pt-job (overnight shift). Traffic was pretty bad as many were traveling to different holiday destinations, but we were thankful to get to St. Paul safely. We arrived at my parent's home before going to my younger brother's family's house for a Thanksgiving family (over 40+ relatives of my brother's in-laws were there) gathering (e.g. great Hmong food, football on t.v. with the guys, etc...). After our great time with family-friends, I refused to participate in the "early" Black Friday. Instead I took Yuu a drive around the Twin Cities, which we would drive by Target to show him the crazy lines (see The Short-Long Lines of "Black Thursday". The next day (Friday 29th), I took Yuu (1st time visit) with my nephew (Stefan) to the Mall of America. It was pretty crowded, which we had to drive to the the top (about less than 10 cars) floor (East Parking Lot side) because I didn't want to waste my time driving around looking for a spot. On Saturday (30th), we drove to Seed of Abraham (Messianic service-Jewish believers of Christ) in St. Louis Park. It was my second time there as I wanted to show Yuu since he has an interest in this particular religion. We then went to Lake Street in Minneapolis to visit several cultural places. I then took Yuu to one of my favorite eateries in East St. Paul-> Pappy's. By evening time, we walked around downtown St. Paul to see the holiday festivities (e.g. Hmong New Year, Rice Park, etc...).

Posted by goodnewseverybodycom at 8:33 PM