The month of July started with "fall-like" (60's) weather as I recorded on my "praise book". On Thursday (3rd), we had worship practice. I had to work July 4th weekend, so on Friday I took advantage of our "day off" by cleaning my attic . I also did my blogs for both April and May as I've been so busy (just like right now on September 13th-I'm finally doing this and hope to do August too). On Saturday (5th), I attended the "Real Ministries" worship time (1st Saturdays of every month), which our (Morris Community Church) local church family hosted this. For this being a holiday weekend, it was a pretty good turnout. Most importantly, we were there for God! Please pray for this particular ministry led by college students as their hearts are to see God's family come together in unity (John 17).

I was grateful for a friend (Tony F.) paying my lunch at Pizza Ranch after church on Sunday (6th). We would later attend the Spanish service (Nueva Vida Iglesia) that evening together, which another friend (Pat) would bring his co-worker. It was awesome to see "others" join this Spanish church service that I've been attending now for the past 3-4 years.

On July 8th (Tuesday), I started a side landscaping job for some friends. They knew I dug a trench for drain pipes in my backyard years ago and they needed someone to do a house they plan to sell. It was an area between a nearby house, so they couldn't get a backhoe. I decided to take on the job as a great workout, which I finished within a week. However, he asked me to do remedial jobs (e.g. landscaping), which I would work several hours after my full-time job throughout the month of July. It was a great side-job and workout (instead of going to the local fitness center)! In the end, I calculated close to 23 (10 hours digging) hours!

During the second weekend of the month, I went to do my annual once a weekend visit to the Twin Cities. I took advantage of MLB (baseball) All-Star Weekend as Minneapolis hosted this year's national event. Prior to heading to the cities, I stopped over at Hometown Bakery as it was it's last days (closed the next day), which I had to get at least some items (pie for friends and cinnamon bread) for the "last time". On Saturday, I hung out with some friends at Square Lake (Stillwater, Minnesota) for a picnic. It wasn't the best weather as it was cloudy and sometimes they had to close the beach due to a forecast storm (never happened). It was a fun time hanging out with my buddy's family that I haven't seen for a long time. The next day (Sunday), I went to MLB Fan Fest 2014, which was a great time to see the different booths and activities all under one roof (Minneapolis Convention Center). On my way to this event from where I parked (next to the Target Center), I had the opportunity to share God's love with a homeless man. This made my time for this event more meaningful and worthwhile! I then walked back to the area by Target Field and had another interesting encounter. This time, I was eating my lunch at Barnes & Noble along Nicollet Avenue when a guy got arrested in front of me. He was taken by handcuff inside a squad car and would later be released. It appeared that he had some issue inside one of the MTC buses and the cops had to talk with each other before letting him go. I then walked around Target Field for some outdoor events before going in when the doors open for the Futures Game... 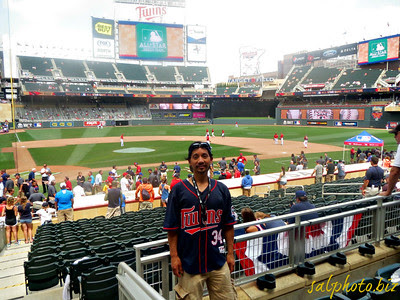 I found some great seats (behind homeplate), which cost only $37 at a retail price of $100. Following the game, I saw part of the MLB Celebrity Softball Game 2014 that was played 30 minutes or so after the game prior. I had to work the overnight, so I had to leave after the introduction of the "celebrities".

I would watch the rest of the All-Star week activities from home in Morris. It was nice to see our state in the "national" spot light during this annual baseball celebration event. I did a little organizing of my garage on Monday (14th) prior to coming down in my basement to watch the Home Run Derby via online (Satelite Direct).

On Saturday (26th), I went to Moose Lake for my every other month visit of a friend that's sentence there for 7 years at the state prison. As I drove back to Morris, I stopped in Glenwood for their annual "Waterama Ski-Show". It was beautiful weather, as I wanted to soak the sun and enjoy the summer weather before I called it a day.

On Tuesday (29th), I attended my first and only softball game (Accelerated Chiopractic) of the season due to knee complications. I ended up scoring towards the end of the second game that night and I played catch with one of my teammate's kid. I wished I could've played :(!

Posted by goodnewseverybodycom at 6:09 AM