I began the last month of the year by working out for the first two days. I renewed my annual membership at the local fitness center and won 10% off, which is lower than my friend (Hafiz) who won %50 off!!

On Saturday, December 3rd I took a couple of "new" Morris residents to Alexandria for the weekend. We first stopped at Glenwood along the way to visit the local county museum as it was FREE, which was part of an open house fundraiser.

After the open house, we drove just 15 minutes north to Alexandria to attend the annual theater performance every Christmas holiday season of "Gospel According to Scrooge". ..

*I ended up writing a blog on this play's plot after a recent conversation regarding family gatherings during the "holidays" (see Restoring Relationships on goodnewseverybodycom.wordpress.com


The following day was the annual Christmas Program that many of the clients I work with at the DAC performed. This year, it was held at Firth Lutheran Church.

"Santa and Mrs. Claus handing gifts and posing with clients for pictures after the Christmas program"


Sport Update: The Minnesota Vikings continued to add to their losing season by getting defeated (on Sunday, December 4th of 2011) by the Denver Broncos (Tim Tebow, who was born and raised in the Philippines to American missionaries). 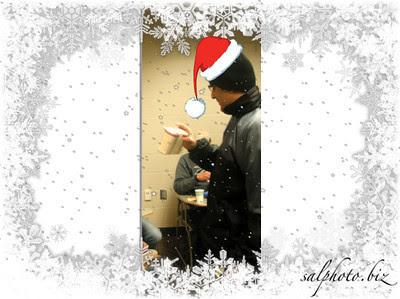 The year is coming to an end, so I had to use the remainder of my vacation time from my full-time job. I took a 4-day weekend the 2nd week of the month to finish some "stuff" (e.g. house projects). I celebrated a ESL student of mine's birthday at Don's Cafe for a late breakfast and continued to celebrate with my closest friends the next day with her at Bella Cucina.

I spent my last day of the 4-day weekend by attending the monthly gathering (learning more about applying our spiritual gifts) at my pastor's house. We had a guest (Stu) that shared on "knowledge" and "prophecy" (see MCC December 2011 Newsletter by Jan N.). I personally got a word of encouragement on "restoring relationships" (see blog above), which was just a confirmation! Praise God!

We did more "end of the year" holiday celebrations as we had our "last" day (Wednesday, December 14th 2011) of our weekly (Wednesday's) ESL-GED classes..

My co-worker continued our tradition from last year by ringing the bell for Salvation Army. This year, we added a reindeer with us and did it for 2 hours at Pamida. One thing I really noticed compared to last year was the customers weren't as "smiley" (see Is it really the "Most Wonderful Time Of The Year ?" blog I wrote afterwards)

The third weekend of the month, I took more hours from my vacation time by having a 3-day weekend. I spend it in the cities with Hafiz as I wanted to show him my hometown where I grew up. We went to several big popular tourist places..

Macys 8th Floor A Day in the Life of an Elf

The last day of this weekend, I showed Hafiz the popular Summit Avenue (west of downtown St. Paul) and then more of downtown Minneapolis before dropping him off at the bus stop (Megabus-cheaper than Greyhound). Ironically, it was located across the Metrodome where the Vikings had a game with the defending 2010 Champions (Saints). They were tailgating across the street. I wanted to spend time with my niece and nephew, so I ended up playing soccer outside (40's) with him for awhile before playing games at Maplewood Mall. I then headed back to Morris for another short-week.

It was another week with more Christmas parties at both of my jobs as I didn't eat supper several times this week because of the supper-like snacks at the parties! On Tuesday, December 20th-I took a former student (Int'l student from China) along with his friends and mine on a drive through Morris to look at the various Holiday lights (the most spectacular display was the mobile homes along Lake Crystal)!

My 10-day vacation from my full-time job started Friday, December 22nd till tomorrow (Sunday, January 1st of 2012), which I would spend it "occupied". I got 42 hours right away within 3+ days (28 hours straight at one group home) with much of it "holiday pay" to help fill in the hours of co-workers that wanted the holiday off to spend time with their families. I didn't mind as I "try" celebrate Christmas "every day". I'm currently finishing my "end of the year" stuff (e.g. photos, videos, blogs, etc..) at my mom's house. It's been a great remainder 6-day vacation from both jobs as I spend it with family (e.g. open gifts late this past Tuesday when I arrived from Morris after dropping off Krishna-from Nepal-at the Greyhound bus station, watched "Soul Surfer" and other "family videos" with family (including my 7yr. old niece and 4 yr. old nephew) Wednesday, rode along with my bro's family around the Lights Display at Phalen in St. Paul, drove my mom to do various errands, etc..) and friends (will be spending time with them New Year's Eve tonight as Hafiz arrives from Ohio by bus, my housemate/renter arrived last night from S. Carolina after a 6 hour delay, etc..).


Posted by goodnewseverybodycom at 6:30 AM