It's Sunday , March 22nd 2020 as I decided to start blogging about my daily life with this quarantine period. Not sure how long it'll last, but I decided that I want to record this for future generations. I want them to learn the "sacrifices" we are currently making with the increase of technology "making life easier" ..somewhat! I have to start when I was visiting family in St. Paul last weekend. I was weary about visiting with the virus spreading. Fortunately, the cases were lower at the time. However, I took precautions, so when I arrived home. I told my mom I need to wash my hands before she could hug me.

I showed my mom and dad the Vitamin C supplement I ordered for them ..

..that I told them to take daily to build their immune system, especially with this virus right now.

Later, I then took some Clorox wipes that I bought awhile back and started cleaning common areas where "we" touch.. 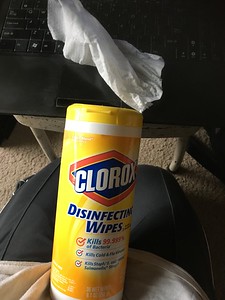 ...I would continue this at my workplace this past week as we heavily focused on "cleaning" at the end of everyday. I did this late last month at my own home after I was sick (caught some "virus" bug too). My past renter was sick before he moved out (mid-February), so I decided to clean afterwards with disinfectants.

Going back to my time in St. Paul last weekend, I was very "on-guard" whenever I went out publicly. I did take the chance to workout at the local fitness center (Woodbury), which I checked the map of where the cases of Coronavirus has been reported. None so far in Washington County, so I decided to go when I checked it around 5:30ish am and went back to bed. Somehow, this whole pandemic has kept me up at time some mornings. However, I try to meditate in God's Word more than usual to give me peace.

In fact, I meditated on Psalm 91 with my mom the night before..

When I was in the cities I would watch the "National Day of Prayer" declared by the U.S. President..

Glimpse of watching different #churchservices streaming live last weekend during the #nationaldayofprayer 🙏 @goodnews_usa (#inGodwetrust 👆✝️) to #stopcoronavirus⛔️ here in our country and the global world 🗺. Feel free to join others Sunday, March 22nd for the #globalvoiceofprayer

Before leaving back to Morris, I wanted to store up some food, water, and natural remedies for my parents in case they can't go outside "totally"..


As I write this (Monday, March 23rd 2020), our state (Minnesota) is not in "total lockdown" compared to several other states (e.g. Illinois, New York, and California) and other countries (e.g. Italy and Wuhan, China earlier this year). However, it's good to be prepared !

Another reason for doing this blog is to share some experiences so far out in the community during this "social distancing" period. Earlier last week, I finally got my new Drivers License renewed; however, it took 3 visits due to the long lines of people trying to get various services from the local DMV. I didn't have the right documents with me or the time was short (e.g. driver license renewals for the new ID takes long, so I couldn't get one if I'm not serviced by 4:30p - closes at 5p) . Well, when I was there for my 3rd visit, the restrictions were higher (Monday, March 16th) when it came to "social distancing" (6 feet was the recommended distance after our state declaration). When I got there, there was no line like the week before. Instead, we were instructed to stay 6 feet away from each other, which was impossible to do in that small tight office! I was at least a foot from the person besides me!

This was just the beginning of this "social distancing paranoia". When I went to work, we were always on the "social distancing" rule. We've always had that "personal space" issue, but more than ever! Clients kept on each other's case about this themselves.

When I would go to the grocery store in the Twin Cities, it was crazy at times. The first one I went to last weekend was Target in Woodbury. I went there Saturday (March 14th) morning right away after my workout so I can beat the rush. Unfortunately, I got there later than I wanted to as I didn't sleep long enough that morning. However, I was able to get what I needed. I just wanted to keep my "social distance" and get out of there. I wasn't able to get the particular water brand (Ice Mountain) my parents prefer, but I did find some toilet paper :) Instead of buying more than I needed, I just stuck to buying a 4-pack so I didn't look like I was hoarding.

I went to the Target closer to my parent's house and this was one was really busy when I went around noonish Sunday (March 15th). My dad asked me to buy some stuff and I went to buy more of that "tea" (above) as this is great to boost one's immune system instead of toilet paper. I have an "emergency" set at home in Morris, and I wanted to buy one for both my parents (above pic, which I previously bought the day before) along for my sister and her husband too. I took a pic of the bread selection as I texted my sister as she mentioned there was not much bread in her area....

This was like a common scene in many grocery stores due to "panic shopping" all over the world. I shared a post earlier last week about the rice being sold out in many stores in the Twin Cities.

When I was back in Morris, I decided to grocery shop late as possible after going early last week after an overnight shift around 7am (Tuesday, March 17th). The store was bare, but it was at the time being stocked. There were staff in almost every aisle stocking the shelves after it was almost emptied out. Also, there were a lot of people shopping so early as there was no school too. I just wanted to get as much of my grocery list and leave. I was able to get most of what I wanted except bell peppers.

When I went grocery shopping late this past weekend (Saturday, March 21st around 9:30ish pm) before it closed at 10pm, I was one of only 2 customers shopping. I saw a post of a "dance challenge", so I decided to video myself dancing while getting drinking water..

Dancing at the Grocery Store

Just wanted to post something with "positive vibes" during this season of a serious situation.

As I write this on a Monday afternoon , I just took a break earlier and took advantage of the sun shining by riding my bike around town. I did ride my bike earlier when I came home from work doing the overnight shift this morning, which I'll post this sometime.

I'm going on my 3rd week of "quarantine", which last week was pretty "slow" when it came to work as I wasn't needed to fill any shifts. However, this past weekend, I had to work as I was put on schedule at one of the group homes short of staff. I decided to write this after finding out during work, a "friend" told me her grandparents caught COVID-19 at a "senior living center" close to my home. I felt like these places are "hot spots" and very vulnerable for an outbreak. Please pray for my friend's grandparents and many others affected at these senior living centers and around the world overall. I decided to post this social media prayer immediately when I got home..

Feel free to share this as a "sample" on what to pray . Keep persevering..Pray Until Something Happens!

During my time at work this past weekend, my co-workers and I were chatting about how this whole "pandemic" has affected the people around us overall. We noticed people are more "nicer" and not so "rushy". Maybe this is more around our rural communities compared to the "panic shopping" going in the "bigger communities". What is it like for you ?

Last week I didn't have to work, so I had a lot of time to "do other things". I noticed I had a lot of dreams that were very vivid as I've been asking God -"show me how I can be a light" for you during this "dark season" around the world. I decided to post more "intercessory" prayer videos, like this..

Let's all come together in prayer, social media community, as one human race, etc.. to fight this Coronavirus: COVID-19 !

Posted by goodnewseverybodycom at 8:14 AM