I was inspired to write this song titled "Why do you do what you do?". I worked on my video house project (e.g. DVD labels) for the guy I've been doing this since almost the beginning of the year. On the 7th, I helped my renter with more of his college writing paper by editing it. I attended this community mentoring (Kinship) fundraiser information meeting, which I biked in hot steamy weather Thursday evening (9th). The following day, I did more biking as it was my Friday "off" from my ft-job. I went biking over 6+ miles or so with my pastor (Pat) despite my pedals breaking off mid-point of the ride. We then went to Don's Café for breakfast.

The 2nd weekend of the month (11th), I took Caio & Luciano (ESL students visiting from Brazil) to Glacial Lakes State Park, which I had fun kayaking-great upper body workout!..

I continued my bike-workout by riding to the local grocery store carrying 2 empty gallons and would fill it. Then rode back with one in each side of my handle bars. I was part of my local church worship team on Sunday (12th), which is always a faith building growing time for me.

On Tuesday (14th), I attended our annual "Defensive Driving" in-service, which is always a great life-application review (e.g. just take your time and not speed!). I worked more on my health-fitness blog (15th) as we didn't have any ESL classes. A "friend" on facebook mentioned about TMJ, so I decided to share my personal experience on how I deal with my TMJ.

I went to the cities for my monthly visit on the 17th, which I spent time with parents as my "fathers' day" weekend. I helped my dad (along with my younger brother) replaced a leaky toilet.

The Morris Kiwanis Talent Show was only 2 weeks this year due to lack of participants, so I would take pictures and videos of the last 2 Thursdays of the month. It was a great time to get-together with people in the community and hangout with Caio & Luciano-introducing them to some friends that were present.

The last weekend of the month, I rode with 4 of my ESL students to Benson's outdoor water park, which we had a great time. We ended up going to DQ for a cool treat and then went back to Morris to this "Hog Roast Fundraiser" for Options for Women...

The next day, I took the guys from Brazil to the annual "Vikingland Band Festival Parade" competition in downtown Alexandria. It was the biggest and longest for this annual event, but we stayed till the end and met this cool guy that took our picture.. 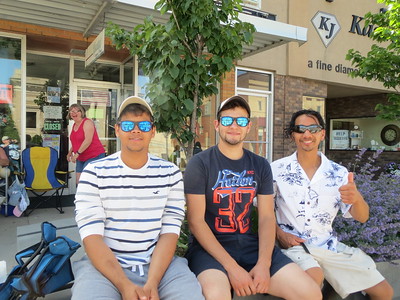 During work, my co-worker asked for a prayer request for this kid that was missing from her family's town in South Dakota. We would find out later the kid was found..praise the Lord!

Posted by goodnewseverybodycom at 5:52 AM No comments:

I watched the "National Day of Prayer" online "live" from my house after finishing up some yardwork. I was about to attend the special service locally, but wasn't able to finish mowing in time.

The first weekend of the month, I brought some of my ESL students (Caio & Luciano from Brazil) to the cities to stay with me at my parent's house. We first went to Hudson, Wisconsin just so they can say they've been to another state. We then drove a little north across back to Minnesota to the beautiful river town of Stillwater.

We were waiting for my co-workers/friends (Oray & Olga) to call us to meet us at the Festival of Nations late Saturday morning. However, due to family circumstance, they wouldn't meet us till 2:30ish. I would give them a tour of the riverfront in downtown St. Paul. To kill time, we walked around the big outdoor annual "Cinco de Mayo" in the beautiful sunny day. We still had some time, so checked out Como Zoo for awhile before they told me they were on their way from the west area of the Twin Cities. Ironically, they happened to get lost and saw us coming out of Como Park's parking lot..coincidence?..not! God divine baby..hehe!..Praise the Lord!

We ended up driving together to the River Centre in downtown St. Paul. Along the way, I accidentally led them to a Wrong Way street, which was my 2nd time doing this in the Twin Cities (1st time happened in Minneapolis..hehe!). When we finally got to the parking lot, we met my sister and my niece & nephew outside of the parking ramp... 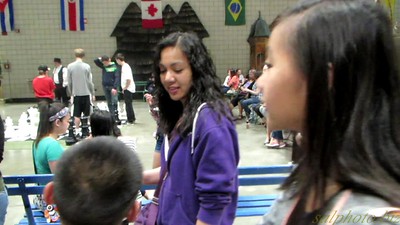 We all hung out at the Festival of Nations, but it was hard to stuck together as a big group. We ended up going our separate ways to see the rest of the event.

After the event, we visited a mass service at the St. Paul Cathedral, where we met my parents at the end. We toured around the beautiful church building before heading back to my parents' house for the night.

The next day, Caio & Luciano wanted to go shopping at the Mall of America, which I would see "Sea life Minnesota Aquarium" for the first time. We would walk all floors of the mall from 11am-5pm or so. It was nice to see some new additions and the remodeled front area (north side)..

We then drove back to Morris and went through downtown Minneapolis along the way. However, the guys were too tired, so we didn't stop to take any pics around the city.

When I got back to Morris, I picked-up my new fixed lawn mower, so I'm ready for the new year. On Thursday (12th), I had a "challenging" day at work, but it worked out. I would spend 3 hours of yardwork after going home, which is somewhat relaxing to just be outside.

On Saturday (14th), I missed the local college graduation for the first time that I can remember. They started a new rule that you need tickets (invite from students) to attend. They've had some over-crowding issues indoors in the past, to it was probably a way to cut down on congestion. I ended up working out at the nearby gym and would see the guest speaker (former Minneapolis mayor) coming out.

I painted the garage in my backyard of my house, which was supposed to be my summer project. However, due to the early nice weather. I decided to start early.

We had no work on Friday starting the last week of the month, so we had had a 4-day Memorial Weekend. I spent it by catching-up on many of my on-going projects. I was supposed to do the paper route on Saturday (28th), but the door to the local paper place was lock. I decided to ride my bike around Pomme De Terre and caught a lot of great footage of various birds. I love the wildlife and nature!

Posted by goodnewseverybodycom at 6:29 PM No comments: