The month started cold as it reached 5 above zero (less than an inch of snow, so NO 2-hour late start at my workplace this time) after having temperatures 17 below zero the previous day. I watched Lord of the Rings movie and got "motivated" to be more of a warrior against "evil".

I went to the Saturday morning "Body Pump" fitness classes every weekend this month except the last one. It was great social time with some folks from my local church and rest of the campus-community. Also, it's a great way to start the weekend.

On Sunday, February 3rd-I volunteered to chaperone a "Youth Super Bowl Gathering" at a local church (Hossana Worship Center) since I took a "youth" that I've been "befriending" 1:1 since last summer. He appeared to had a great time as I too had fun playing a couple of pick-up volleyball games (Adults vs. high school youth), which my teat lost the 1st and won the 2nd game (close win and the youth lost part of the team because it was getting to the end of the night). The Baltimore Ravens narrowly beat the San Francisco 49ners (almost came back after a 30+ minute or so "blackout") at Louisiana.

I helped out with others with the Pre-Testing of ESL students at the campus on Monday the 4th. It was great turnout for both students and volunteers!

I drove to Alexandria on the 5th to return a handrail that was too short for my basement stairway. After dropping it off, I went to Office Max to "window shop". While checking out, some stranger nervously waited for me and asked if I owned a car he "accidentally" hit. I told him to not worry about it as there was hardly any dents. I thanked him for his honesty as we depart from each other in the parking lot. I then took advantage of my time there by visiting a former housemate, who left a message on my old home phone # with another former housemate. He gave me a free trial membership to the local YMCA. After working out for about an hour in the cardio machines, I was more satisfied and appreciated of our facility (RFC) back in Morris. It might not be as fancy as the big nationwide chain fitness centers as Bally's or Gold's Gym, but we got almost a "first-class" fitness center for West-Central Minnesota! We met together to catch-up as he shared how he found his new "Christian Faith"!

I had a new temporary route at my full-time job as I drove the mini-van to Benson each morning and afternoon. I did this for a week and half with several days missed due to "bad weather". It was a fun route as it was something different from my daily routine (in-town route). On Friday the 8th, we had our annual "Valentine Dance" at Clinton (30 minutes west of Morris). This time, it was above (24 F.) zero for the 1st time that I can remember in many years. It was great weather for driving my Benson route!

I was invited at a friend's house from my local church, which a guest (ESL student) cooked some great Cambodian food... 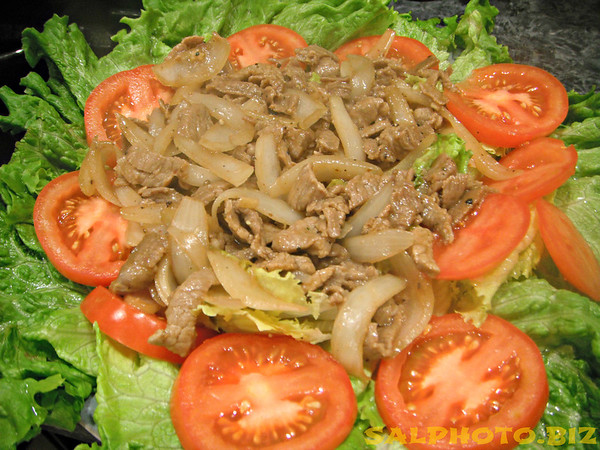 Church was cancelled for the 1st time in so many years on Sunday the 10th due to a 12" blizzard (6 inches Sunday morning and another 6" or so in the afternoon). We ended up having service at the pastor's house for those in-town that can make it. I was hoping to make it, but I didn't get my alley shoveled till close to 10am. I'm very thankful to my neighbor Bill who lives 2 doors down who shovels my and others front side-walk in our entire block all the time. I usually try to return the favor by using my roof-shovel to help him and other of my neighbors. As I drove to my pastor's house in the west-side, I couldn't get into his alley. Thurs, I wasn't able to make it to the special service. The roads were really bad driving around that time of the day, but I was able to get around. It would get worse as the next day, we had a "Snow Day" (my work and local schools were closed). I had to work my pt-job at the group home on Sunday night, which was "bad" driving in-town itself. I made it to the front of my workplace safely, but couldn't get in the driveway. I ended up getting stuck trying to get through it. It took over 15 minutes to get myself out (thanks to a local cop-Anita, who helped shovel a path through the snow). I even slipped and fell back as I was running to hurry-up shoveling...lol!

The next morning (11th), I couldn't get into my garage of my house since the city hasn't plowed my alley this early (7ish) in the morning of the blizzard. I ended up parking up-front and got my lab top to bring it to Common Cup. I would hangout at the local coffee shop for 5-6 hours since work was cancelled. I took advantage of a gift card I got and would end-up having breakfast and lunch while working of my on-going computer projects.

I would meet another rape victim online, which she shared her story of how she was raped by a neighbor for over a year of constant abuse. Why a year? She was threatened by this neighbor at age 14 if she ever told anybody! :( I've been sending her on-going testimonies of other rape victims to encourage her.

On Valentines Day (Thursday 14th), I would start bringing my friend's 8 year-old son (Dimitri) with me to a weekly fitness class called "Zumba" every Thursday evenings (@7p-8p). This time was a break for the "mom" with her other kids and this is also part of my "mentoring" New Year's goal. He has been enjoying this time as we both get exercise and getting good conversations (e.g. school) during our short drive to and from.

On Sunday (17th), I was scheduled to "greet" at my local church. I was blessed to get a "word of encouragement" about "being more open with fellow believers (2 or 3) for accountability purposes as the Devil/Satan likes to deceive us that we are alone on whatever we are going through (e.g. "struggling with challenges")" from a fellow "older brother in Christ".

Later in the day, I drove to Alexandria with a friend to go snowboarding at Andes Tower Hills in Kensington, Minnesota. I "thought" it was ideal weather (30's), but the roads going from Cyrus to Kensington was pretty challenging to (did a 180 on the slippery state highway north of Kensington to State Highway 29) and from (slowly slipped off the road, but my friend Chris was able to push my car as I slowly backed up from the edge of the pavement). It was windy, so I was glad I brought my face mask. I not only enjoyed the great fluffy snow for snowborading, but the great time chatting with the various people (e.g. 2 international students from China, ski-patrol that used to live in Morris that worked at the group homes, the ski-lift guy himself with his great lines, etc...) I met along the ski-lift rides.

The next day (18th-Monday), my workplace closed earlier (1/2 day of work or so only) due to increasing "bad weather" conditions (blizzard-like). The following day became a "Snow Day", which we had close to 39 below zero windchills. I still got around town to do some errands (grocery shopping) with my housemate. I was called-in to my "second" job (PCS-group home: 4-11pm) since a co-worker couldn't get out of his home due to high snow drifts caused by the high winds. I texted my sister our forecast while she was visiting our Aunt in Florida.

On the last weekend of the month, I had to go to Alex for our every other month or so ABE (Adult Basic Education) meeting. I got back in time for Dairy Queen's 50% off "everything" sale as part of their annual "Customer Appreciation Day". On Sunday, there was a special joint services of 3-different churches in pre-lude to this "World View Conference". It was a great time to meet other's in the family of Christ. I was very humble to see my pictures posted in my local church's newseletter, which I took (along videos) of this great "Kodak moment" (churches' unity-John 17)! This was a 2-day conference about challening each other on the way we look at the world (e.g. from a sociological perspective), which you can see notes in above link. On Monday (25th), my niece had a piano recital, which my sister shared (pics) via email and videos from my brother's in-law via facebook. I'm so glad for technology to be able to do this since I coudn't make it.

On Tuesday, a co-worker's dad passed away, which he was a WWII vet. I had a chance to chat with another WWII Vet while waiting in-line at the local funeral home during the "Wake Service". He (Leslie N. from Donnelly) and I have had previous conversations, but he was very open to share more. He was an MP in the Philippines, which he shared stories about his work with the roads that were damaged from Japanese bombings. While he was working along with the Army Corps of Engineers, he met the Filipino President (Manuel Quezon) at that time. He didn't remember his name as he told me this story, which I would tell him as it was refershed in my mine as I told him I visited Corregidor Island last Fall (November 2012).

On the 27th (Wednesday), a friend finished completing a quick 2-day project of putting safety covers-handrails of my basement apartment. I tried to do this myself (using fancy ballusters), which I had no-luck. I wished I contacted him earlier on this project instead of spending on expensive materials that I ended up not using. It looks beautiful!


Posted by goodnewseverybodycom at 8:53 PM No comments: