On Monday (5th), DAC hosted their annual "ARC Board Meeting Picnic" with the help of Willies Super Valu (owner grilled burgers and brats). We couldn't ask for a better day as God brought sunshine and beautiful weather.. Praise the Lord!

The following day (6th), I hung out with some friends (Yuu & Chris) at Old#1 to watch both the Minnesota Twins play (lost 4-2 against Central Division last place Cleveland Indians :( ) and the Minnesota Wild (2nd round of the playoffs) win Game #3 (down 1-2) against the Chicago Blackhawks by 4-0!

On Wednesday after my weekly ESL-GED classes, I went over to a special service going on at a local church family's house. It was a great service even though I came late for the last hour of it. This past Sunday's guest speaker (Michael G.) shared and led a prayer service for the Baptism of the Holy Spirit (see Good News Ministry).

I started the 2nd weekend of the month by going golfing (driving-range) with my housemate (Yuu) on Friday at (9th-Pomme De Terre Golf). It was my 1st time to go this year as the weather was great. We then went to Old #1 again to watch the 4th game of the Wild vs. Blackhawks series. We ended-up winning that too as we had home ice advantage. Yuu and I each invited all our friends (Hakeem-sp?, Julie, Jillian, and Wagner-newest ESL student from Brazil) to join us as we had a great time hanging out.

On Saturday (10th), it was the UMM Commencement Graduation, which I was happy to see my housemate and others that I've befriended graduate. It didn't rain as they forecasted, but it was too windy and there was a "little" chance. Thus, they had to move it indoors. The following day, like many years after UMM Graduation, it was "Mother's Day". We had a special service to honor the moms at my local church. We had a guest from our connection to Mexico-Vineyard Church, which I would invite them to the "Spanish-speaking" church ( Iglesia Nueva Vida) at the Morris Evangelical Free Church. I haven't had the chance to visit my hermanos-hermanas (brothers-sisters) in Christ there for awhile, so it was good to see them. The next day, my housemate (Yuu) had to leave for Japan, which he left the following day with his girlfriend to the Twin Cities. He would then leave the next day by plane to home. It was a blessing to have him over at the house, which encouraged me on my mission or "calling" in housing international students to "welcome" them to Morris. O

On Wednesday (14th), we had a cultural experience of trying a Brazilian drink called "mate" (pronounced as "mah-tee"). This student brought his unique cup and we all started sharing it as a volunteer (Jon) bought a bag from his own home to share with the class.

The next day (15th), we had our 1st official practice for the men's softball team. My left knee isn't completely healed from my unfortunate knee accident when I fell on ice last March, so I took it easy (not diving for balls) as I work a knee brace. However, I felt good hitting during batting practice! I would later go to another practice the following week and not play any games for the season at this point (4th of July) as I want to rest and focus on other activities (e.g. play music).

On the 3rd weekend of the month, I took my every other month or so visit to Moose Lake Prison. It was a nice day for driving (60's). When we got back from Moose Lake, we stopped over at Molitor's Place Restaurant. We drive by this place every time, so we got curious on checking this place out... 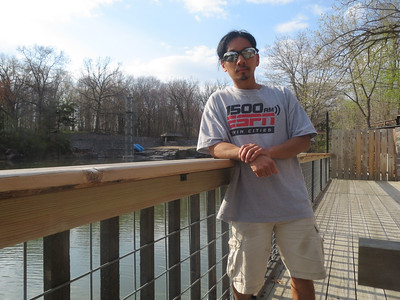 I ordered this fancy personal size chicken pizza, which reminded me of Bella Cucina's! They had a great sweet potato fries too, which I shared with my friend.

I sung with my local worship team the following day (Sunday 18th), which I enjoy everytime! Later in the day, I continued my summer projects by preparing my garden (tilling and planted seeds such as sunflower and potatoes).

On Monday (19th), we had our (workplace) annual board-staff supper after work. It was a great evening and I had great time with the people I saw with over a delicious meal catered by a local restaurant (?).

The following day (20th), we had another volunteer work time at the new church building. They had to do some preparations for the new carpet. We did some moving and cleaning. The next night, I was invited to a couple of friend's bonfire. We stayed up till past 10ish in the nice evening before the mosquitoes! On Thursday (22nd), I went to my 2nd softball team practice, which I had a great at bats (many line drives)! Too bad I won't be able to play :(... I did more house yardwork the next two days including cutting the large bush in front of the living room window. However, I couldn't cut the 2nd one (by housemate's master bedroom) due to a baby robin...

We had our last church service at the local high school, which was a mix of emotions (sad that we are leaving this place we've had service for many years and happy to get out of here to move on :)) . We had a couple of guest that came, which coincidentally was a friend (along with his girlfriend) that used to come to this church many years ago. However, he came when we were meeting at the "old" local elementary school. It was actually his first, only, and last time at this high school auditorium. I took them both as a treat to Don's Cafe for lunch after service, which they went on to Chokio for a friend's high school graduation. It was a great fellowship time!

It was Memorial Day (Monday 26th) the following day, which I didn't do anything special besides doing stuff on facebook. I did some multi-media projects (videography-photography), clean tools in my garage, etc.. The next day (27th), we had our first "unofficial" church worship service-prayer meeting at the new building. We didn't have the new chairs yet, which we used some "used" ones. It was cool! I then went to the 2nd game of my softball teammates to cheer them on and I dressed in case as a back-up. We won the 1st game (15-3) and lost the 2nd game (3-15), which I probably brought "bad luck"..lol! :( , A co-worker (THANKS Christine B.!!!) of mine gave me a couple tickets to the movie "God's Not Dead", which I actually got teary as it brought up a lot of life challenges (e.g. elderly, Alzheimers, Cancer, Philosophical questions on: life, creation; etc... I can't wait till this movie comes out in DVD, which I would love to share that "God's Not Dead" (Newsboys challenged us to text this at the end of the movie) to as many people.

The last weekend of the month, I went on my monthly trip to the Twin Cities to visit familia. It was a scary moment Friday evening with my nephew as he was coughing blood (came from his bloody nose) as he's been sick after coming home from North Carolina for a vacation. Thank God he got better. I also came home to help hook the computer I bought as a gift to my parents, which is supposed to be "elderly" friendly! Then my friend Wanny (h.s. buddy) text me to read his book (about motivation) online on his story that I never knew about since I've know him during junior-high school!

Posted by goodnewseverybodycom at 8:15 PM